Plan B - retire or retool in Costa Rica
2 Comments

Who helped make your move to Costa Rica easier?  Who helped you learn your way around, find the things you needed to build your dream, and feel like you could be happy in this beautiful but rustic country where everything feels foreign?  If you ask any expat in Costa Rica these questions, very likely, they’ll tell you about a particular  friend who gave them a “soft landing”.

Some people got here by following a friend or family member from their home community and buying property in the same village.  Some were lucky to meet an honest attorney or an architect helpful beyond their job description.  Others met a friendly couple through a chance conversation in a restaurant or while waiting at the bank that led to information about a perfect property for sale, a connection with a reliable builder or an exceptional wood-worker who makes custom furniture.  Where’s the hardware store with the best selection of bolts?  How do you pay your taxes when the laws seem convoluted at best and unbelievable at the worst?  In a country with a strong oral tradition for spreading news and gossip, the yellow pages aren’t much help.  If you can find a copy, the numbers are disconnected or the addresses are out of date. When you decide to move to Costa Rica you need a personal guide who,  like an air traffic controller, can bring you safely in.

Like many North Americans, when we arrived in Costa Rica, we didn’t speak much Spanish.  We couldn’t figure out the simplest things like why, when we thought we both ordered the same lunch, Steve got a beautiful fish filet surrounded by a variety of colorful side dishes but I got a whole fish, with crispy brown skin and flesh that flaked off the bone.  Both were fresh and delicious but, for most of our first vacation, the ability to repeat the order eluded us.  We got used to enjoying whatever showed up on the plate.  That was back when no one at the beach had desktop printers and menus were too expensive to be updated, when all options were presented orally but we couldn’t understand them.  That was the fun and adventure of a vacation.  But when we decided to purchase land and build a vacation home, we needed more guidance and more certainty.  We needed a  guru. 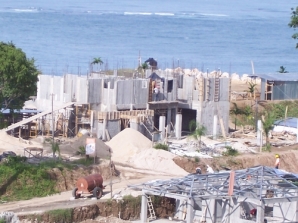 We were lucky, on our second day in Samara, to make the acquaintance of a French Canadian builder who became a great friend and our aide de camp.  Andre was just finishing construction of a house on one of the lots in a development we were considering.  He showed us around the house, pointed out some design features that were important for the tropics and for a house that might be unoccupied much of the year.  Later in the week, we stopped by his front porch where, through the following years, we spent many hours drinking red wine, eating peanuts and benefitting from his experience and advice.  He and his wife, Isabelle, had come to live in Costa Rica 13 years before us, first “home-staying” with a Tico family while studying Spanish.  He shared with us their version of a soft landing – they had all become good friends through the years – and how their friends had helped them import a car and negotiate the aduana and marchamos.  Andre became our contact in  Samara and our coach for the challenge ahead.

He and Isabelle helped us in so many ways after we bought the property and began to plan our dream which, somewhere along the way, turned into a full-time residence.  For six years, while we only visited Samara and our stickery bare lot for short vacations,  Andre maintained our property.  He made sure the razor-like grass was cut the day before the surveyor showed up.  He and his son, Martin, built us an exquisite bodega where we could begin storing all the stuff Continental Airways brought down in our luggage.  He looked out for us and saved us money.  When the water department brought a new line past our property, Andre called us in Seattle to ask if we wanted to hook up, even though we weren’t planning to build for several years.  He pointed us towards resources, introducing us to two Tico architects, with very different working styles, who could help us accomplish our dream.  Since I am an architect and designed our house, I wanted a licensed CR professional only to implement my plans and assure quality

construction while we were still up north working to pay for the dream.  Isabelle handled all of our bills here, kept our staff paid and supplied with tools and materials for cleaning and gardening.  They held our hands.  When we locked the keys to our rental car inside the car at Carrillo beach, Andre drove over with his toolbox to help us break in.  When we got a distressed email from our renters on Christmas Eve because the water pump had died, he hooked up temporary water from the neighbors,  ordered the parts and fixed the pump. 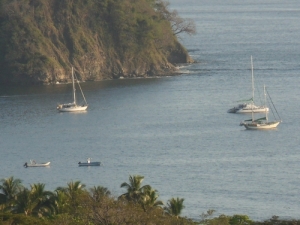 Everyone you meet here has a story like ours and can tell you the name of the person who helped them make Costa Rica their snug harbor.  More than a few people point to Andre and Isabelle.  But a French couple, Phillipe and Evelyn, met a realtor on-line and, even though Patricia couldn’t help them find a house to rent, she continued to correspond with them, answering their questions and helping them prepare for their move.  When Patricia herself arrived nearly 15 years ago, she landed in a small Italian-owned hotel and ended up staying there for 18 months while the owner, who happened to be one of the best contractors in the area, built her home.  Someone helped her buy a car and encouraged her to start her real estate company.  Wolfgang remembers his German friend who told him about the bar for sale in Samara and helped him buy the liquor license.  Rosie and John followed their friends from Edmonton to build a full-time home in the hills over-looking three beaches.  Virginia moved to Samara from Buenos Aires, at the encouragement of her former exchange sister from the University of Oregon.  Craig and Myla had planned to build in Quepos but instead knocked on the door of Bill and Donna, simply because a mutual friend in Florida told them to.  After spending the weekend in the guest house, they abandoned their plans for Quepos and decided to stay in Samara and buy the house next door.  Sometimes it’s the beauty of a place that attracts you but the warmth of a community that  supports you.

We’ve learned a great deal since we moved to our little piece of paradise.  Just past our 5 year anniversary, we speak passable Spanish, although I don’t expect to be fluent ever.  (Back when I was studying French in college, I used to dream in that idiom but I have never dreamed in Spanish.  For some of us it’s too late to turn on that switch.)  Nevertheless, since we know a few of the ropes, we can help new arrivals make the transition from turista to Samareño.  When my 80 year old uncle built his dreamy bachelor pad, we were his cayotes during construction and beyond.  Next, we found a valley-view Now, Kelly skypes frequently from Laguna Beach for our interpretation of the latest thing he’s read online about CR.  We’re  lucky to have family near us and they’re lucky we’re here for them .

We’ve made Samara our home in a deeply satisfying way.  We are now so comfortable here that we sometimes forget how foreign and difficult everything once was.  But we never forget the friends who gave us our soft landing.