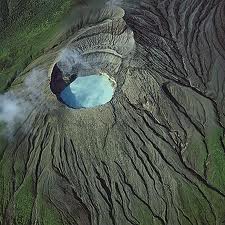 A.M. Costa Rica reports that the activity has been going on since mid-August, spewing smoke and rocks.  It sent a vapor plume 800 meters high Sept.16.  Some of the jetsam has caused Fishkill in local rivers.  The trail to the crater has been closed and  the government is asking locals to keep an eye on it and report their observations.  Seismic experts think the awakening was caused by a small earthquake 10 kilometers (6 miles) away in July.