How’re you going to keep the cows out – or chickens or goats or  dogs?   That question is the answer I’ve been looking  for as I see the variety of gates in Costa Rica.  Everyone has a gate here.  Everyone.  Some are quick and dirty.  Some are  elaborate and have fancy metalwork and huge posts.  They’re made of lumber, metal, and barbed  wire.  Some are simply functional and  some are carefully crafted works of Some gates are meant to be secure.   Some are “securish”, offering just the  suggestion, “Don’t come in without knocking”.  What they all have in common is that they’re meant to keep something out. 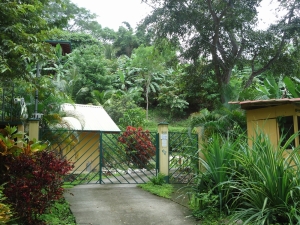 The thing is that gates in Costa Rica do the job that doors do  in northern climates.  Tico houses are  small, mostly used for cooking and sleeping.  The rest of life goes on outside in the shade, under a porch roof or a big tree.  As you drive around Samara, you’ll see women lined up in rockers on the front pasillo, watching the activity go by on the road.  Somebody’s napping in a hammock next to a boom box.  Children are playing with a doll house in the yard.  The baby’s on the ground on a table-cloth.  There’s corn or beans drying on a blanket in  the sun.  Because you live outside, your stuff is outside and a beefy front door isn’t going to protect much.  You need a gate. 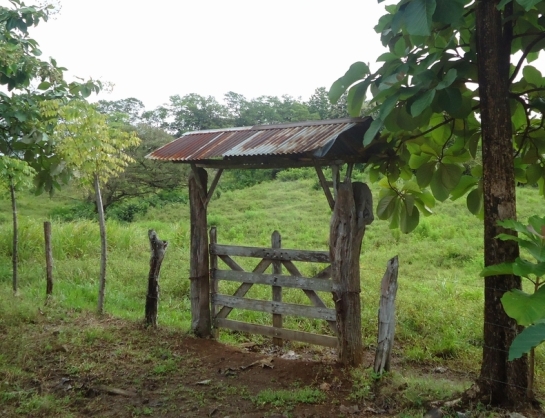 There are all kinds of gates around here but my favorites are the farm gates, sometimes a rustic barbed wire affair that lies down when you open it.  (Are they keeping the cattle in or the roaming horses out?)  But simple as they
are, they’re still protected from weather with a roof.  Everything rots in Costa Rica, given a rainy season or two.  A roof gives you a little more time before you have to replace your gate.  So the big fancy gates often have roofs too.  But make sure they’re tall enough for the  truck that delivers your refrigerator.