A lot of sailors, especially “round the buoys” racers, dream about sailing off shore.  I’ve only been out there once.  A hundred miles off the Pacific coast in a little known regatta called the Cobb Seamount, drifting for a week in fog and light winds, I found it exceedingly boring.  The highlight of the week was a small tuna that jumped into my lap on a wave surge.  But I don’t think these guys are bored. 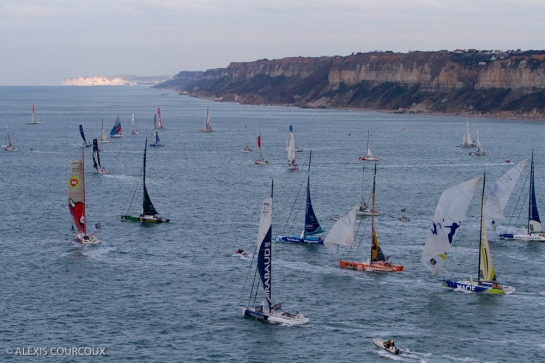 Delayed 2 days due to bad weather, thirty-five boats left Le Havre France 30 October 2011 bound for Puerto Limon, Costa Rica in the 10th Transat Jacques Vabre.  In three classes, eleven boats have already dropped out.  The multi-hull Class 50 is down to only two from the original 6 starters.  Each boat sails double-handed with two skippers.

The race sponsor, Jaques Vabre, is a member of the Rainforest Alliance, which supports sustainable development of its producers, and chose destination Limon for the second time, to highlight its coffee brand.  The race typically follows the historic trade routes that brought coffee from the new world to France.

When the sailboats reach the Caribbean, the faster multi-hulls will split from the IMOCA mono-hulls, adding more than 500 miles to the course.  This route division helps to spread out the arrivals in the tight quarters and shifty winds near the Port of Limon, where they’re expected to arrive around 22 November.  The smaller Class 40 monohulls will arrive  last.  You can keep track of the boats progress here and see the proposed route here.