Foundation of a neighbor’s house is undermined by a landslide.

Wow!  If that wasn’t THE big one, I think I’ll pass.  It was terrifying.  Both up and down movement and north and south and for an eternity.  (My geologist neighbor with stopwatch tells me it lasted only 43 seconds.)

But after several hours we’ve calmed down and made tours of our property and the village  and, amazingly, all is mostly well.  Our houses seem to be perfectly intact but others on steep slopes have undermining of foundations due to slides.  And clay tiles have come off roofs.  Reports of window glass breakage.  Our own roofs are metal so i usually hear the aftershock before I feel it.  We, at Casa Gecko,  were concerned about broken water pipes but so far no evidence of that.

Typically, there was more damage in urban areas like our inland county seat of Nicoya, just 25 miles away even though, from most reports, we were closer to the epicenter.  Here’s a video from Nicoya, showing worse damage than I have seen here in Samara.  It also talks about the changes to the beach.

Why have glassware in a concrete and tile house?
We break plenty just washing the dishes.

Immediately, there was a tsunami alert, which isn’t exactly a warning, but the Ticos took it quite seriously and trucks and cars were loaded and heading for higher ground.   No wave arrived, although I firmly believe that we have more beach today than yesterday.  Reports now say the land rose 1 1/2 meters as the Cocos plate subducted under the Caribbean plate – the fault line is out to sea.  My understanding is that we’re on the Caribbean plate – A brief reprieve against rising sea water due to global warming.

You can almost walk to the reef today. The land rose 1 1/2 meters as the Caribean plate (ours) subducted over the Cocos plate (out to sea).

We were without services immediately.  The land phones came back within an hour or two, followed by cellular.  We just got power back 8 hours after the event.  (ICE is an amazing utility company).  The road is again open between Samara and Nicoya, but there is a damaged bridge at Playa Carrillo – it’s open to light cars but busses and trucks are not passing.  I understand there was also  bridge damage on the road to or maybe past Nosara.  The gas station is again selling gasoline and a tanker arrived while we were filling.  Our local utility says our water system is in perfect shape.  We are then much luckier than Nosara where some reports say their water system was destroyed and they will be without water for a week.

We have had continuous aftershocks all through the day and night.  The +5 at 3:30 am woke me up.  but now I know the difference between 5 and 7.6.  I understand the Richter scale a little better.

Thanks for your concern.  Thanks to those of you who called or wrote.  Early on, we couldn’t communicate with each other around town – we could only shout across the fences and hillsides – but we could talk to Laguna Miguel, California and Maui.  Go, figure!

In North America you probably have better news sources than we do but here are some links.

Right now we are feeling very lucky.  And if this was THE big one, the pressure is released and we’re safe for another 50 years. 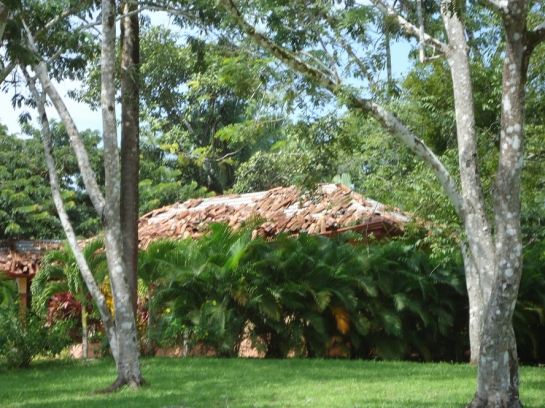